One of the best ways to create eye-catching 3D prints is to print them in multiple colors. This is often referred to as multicolor printing. It is a great way to add extra color to your prints without having to resort to post-processing techniques like painting.

Dual extruder 3D printers that allow for printing in multiple colors at the same time have been around for a while. Most of our hobbyist printers only come with a single extruder however. Luckily, there are also methods to multicolor print with only one extruder.

In this article I will show you the most common methods for multicolor printing with a single extruder, along with their advantages and disadvantages.

Pause at height and swap filament

One of the most common ways to 3D print with multiple colors is to pause the print and to manually swap out the filament with filament of a different color. Often this is done when the printer increases its Z position to move to a new layer. It is often referred to as the pause at height or pause at layer method.

You are not limited to swapping filament colors only once, it is possible to swap filaments many times during a single print to create cool visuals.

Edit G-code to pause the print

If you need more precise control, for example, if you want to swap filament on a layer change, it is best to edit the G-code of the print. This causes the printer to automatically interrupt the print and enter a pause state.

One advantage of this method is that there is no need to monitor the 3D printer. Once the printer reaches a specific layer that you want to swap the filament at, it does the pausing without any human input.

Editing the G-code involves inserting pause commands. You can do this by hand, or you can have the slicer software do it for you.

How to manually edit G-code to pause a print

To manually edit G-code to set up a 3D print for automatic pausing, you can do the following:

1. First, find in your slicing software the exact layer(s) you want to swap colors at.

2. Generate the regular G-code for the print and open it in a text editor like Notepad.

3. Edit the G-code by adding pause commands. For example, the G-code I add to pause the print is as follows:

This moves the nozzle up 10mm, and then pauses the print. I let the hotend move upwards first so that any filament that oozes out of the nozzle will be in mid-air instead of oozing on the print.

In the example from before, where I want to pause the print at Z2.20, the resulting section of G-code would look something like this:

The M600 pause command works for many printers, but not for all of them. For example, on the Duplicator i3 the G-code to pause is M25. Make sure to look up the pause command that works for your printer!

How to automatically insert pause commands in G-code

Aside from manually editing G-code, it is also possible to have the slicer software automatically insert pause commands when the G-code for the print is generated. This saves quite a bit of time and effort when you want to pause a print several times.

Slicers usually do this by running a post-processing script after generating the G-code. This script inserts the pause commands at the relevant locations.

In Simplify3D it is possible to automatically insert the pause commands when the G-code is generated. You can do this by going to Edit Process Settings -> Scripts and then finding the “Additional terminal commands for post-processing” section at the bottom. 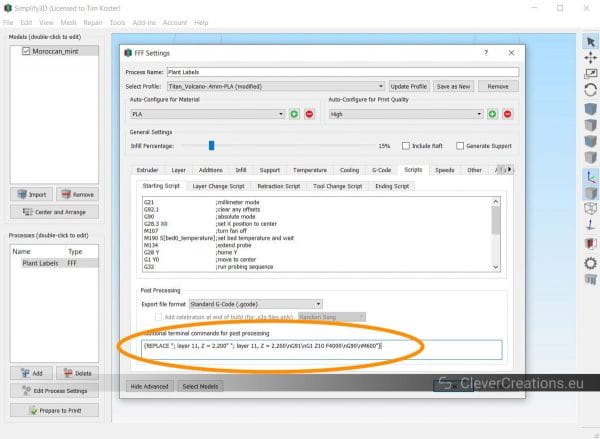 In the corresponding text box you can enter a script that inserts the pause G-code. For the example where I want to automatically pause at layer 11 @ Z2.20, I would add the following:

What this does is that it finds the G-code comment that announces the new layer ( ; layer 11, Z = 2.200 ) and replaces that line with itself + the additional pause G-code on the next lines. The \n in the script signals the start of a new line. You can compare it with pressing Enter on your keyboard.

If you want to use this script for your own G-code, you need to replace the layer numbers (11), and Z heights (2.200) in the script with the ones from the layer(s) that you want your print to pause at.

It is also possible to use multiple replace commands at once, for example when you want to pause the print multiple times to swap filament. That would look something like this:

You can find more information on the post-processing feature in Simplify3D here.

Post-processing in other slicers

In short, you need to insert the right post-processing script in your slicer, and make sure that the G-code in the script is correct for your specific 3D printer. In many cases you will be able to find an example pause at layer height script online for your 3D printer that you can use. After setting the right layer heights in the script, you will be able to pause 3D prints at the exact height you want.

How to change filament colors after pausing the print

After pausing the print, whichever method you used, the next step is to change to a different filament color. Let’s see how to do that.

Before swapping the filament, make sure that the hotend is heated to the extrusion temperature. It is important for the filament in the nozzle to be melted, otherwise you might not be able to pull it out.

Purging the old filament can take a while, especially when switching from a darker to a lighter filament. I think this is because leftover dark pigment is more easily visible in light filament than vice versa.

Another method to multicolor print with a single extruder is to create virtual extruders in your slicer. This essentially means telling your slicer that your 3D printer has multiple extruders with different color filaments. In reality, you will be swapping out filament in your only extruder each time the printer is supposed to change extruders.

The big advantage of this is that it gives you the opportunity to print with multiple colors on a single layer, just as you could do with multiple real extruders. This is something that isn’t possible when you swap filament on a layer change.

Virtual extruders come in handy when you have a model that you want to print in multiple colors, but that needs to be perfectly flat without additional colors that stick out (say for something like a coaster).

A downside of this method is that you need a multibody 3D model to print, as each virtual extruder prints one body in a specific color.

Multibody 3D models can take more time to design, and there are less available to download on sites like Thingiverse, compared to singlebody 3D models.

Here you can find a tutorial on setting up virtual extruders in Simplify3D.

Aside from swapping out filament to add additional color to your 3D prints, it is also possible to print with multicolor filament. Multicolor filament is filament that has multiple colors on one spool. It usually gradually transitions from one color into another. Some spools have two or three colors, whereas others cover the entire rainbow.

Not all of these spools work well for smaller prints, because prints can be too small to have the color transitions show up. So if you want to make the best of a spool of multicolor filament, pay attention to this.

Making your own multicolor filament

Besides buying multicolor filament, it is also possible to create your own. This is done by splicing multiple colors of filament and joining them together. You won’t have any gradients, but you will be able to control the exact colors and number of color changes.

Here you can find a tutorial on fusing filament together yourself.

If you find this article useful, please share it or leave a comment. I love to hear your feedback and questions!

2 thoughts on “Multicolor 3D Printing with a Single Extruder”

On this site I share with you my passion for creating, making, repairing and other hobbies. You can find cool projects, repair guides and other tutorials.

CleverCreations.org is a participant in the Amazon Services LLC Associates Program, an affiliate advertising program designed to provide a means for sites to earn advertising fees by linking to Amazon.com, Amazon.ca, Amazon.co.uk, Amazon.de, Amazon.fr, Amazon.it, Amazon.es and affiliated sites.

SAVE & ACCEPT
Scroll to Top